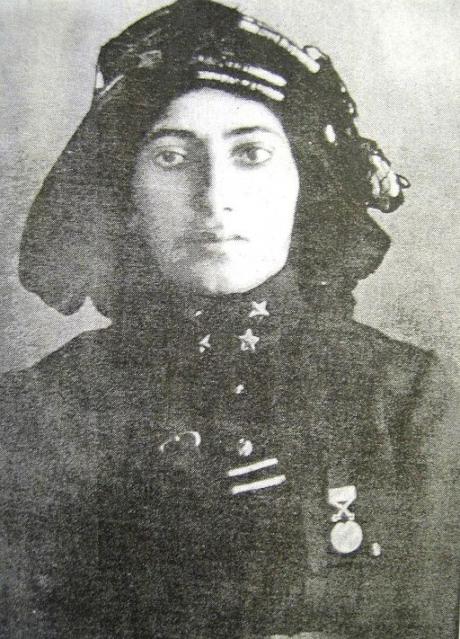 The Kurdish women’s history of struggle is not a recent phenomenon. The last generation of Kurdish women grew up recognizing women fighters as a natural element of Kurdish identity. But before that, in the late nineteenth century, there was Kara Fatma, a Kurdish woman who led a battalion of almost 700 men in the Ottoman Empire, as well as Halima Khanim of Hakkari who was the ruler of Bash Kala or Adela Khanim, ruler of Halabja near the Turco-Iranian border.

How did this happen, especially in Turkey, where women in general are oppressed and Kurdish women specifically are more oppressed than their Turkish counterparts?

The war in the Middle East against the Islamic State in Iraq and the Levant (ISIL) has drawn the attention of the entire world to the region. The focus is especially on the Kurdish women fighters who have even graced the cover of women’s magazines such as Marie Claire. This explosion of media coverage is not only sensationalist, but also underestimates a whole history of the Kurdish women in their claim for political recognition as well as their struggle for gender equality.

In fact, the autonomous Kurdish cantons in Syria are ruled by women. Hevi İbrahim is the prime minister of one of the cantons (Afrin), Asya Abdullah is the co-chair of the Democratic Union Party (PYD) that rules the Rojava region, Ramziya Mohammed is the finance minister of another canton.

There is also a female military troop (Woman Defence Troops, YPJ) active on the ground in western Syria. In the meantime, in the neighbouring country Turkey, the Kurdish political parties BDP and HDP presented women candidates for local elections in a record number, and they both adopt a system of co-chairship (one male-one female for each ruling position in the party).

How did this happen, especially in Turkey, where women in general are oppressed and Kurdish women specifically are more oppressed than their Turkish counterparts? The answer to this question lies in the history of the foundation of the Turkish Republic. In order to build a nation-state, the founder elites aimed at constructing a nation unified around one single language, ethnicity (Turkish), culture and collective memory. Since its foundation in 1923, the existence of the Kurds was constantly denied. Towards the mid-1920s, the coercive measures of the government started to increase. Speaking Kurdish was banned and juridical practices were followed by military ones. By the 1930s, with the rise of fascism in Europe, the Turkish governments also displayed nationalist sentiments under a single-party system. Oppressive practices and assimilating policies increased to the extent that there has been a policy of ‘Turkification’ in every aspect of life; from education to culture and even to the economy. The Turkish state thus initiated a struggle against those who would not identify themselves as a Turk. This practice went as far as emptying Kurdish villages to fill them with Turkish-speaking populations and changing the Kurdish names of villages into Turkish ones.

The military coup of 1980 was the apogee of these policies where the Kurds and their newly expressed demands for identity were harshly oppressed by the military junta, and some Kurdish politicians were forced to flee Turkey. The oppressions and persecutions such as imprisoning Kurdish political leaders and torturing them, racketing Kurdish businessmen or unsolved extrajudicial executions of Kurdish lawyers and human rights defenders rose during the early 1990s.

The Constitution of 1982 which prohibited the use of Kurdish language in daily life was the last straw and as a response, the attacks of the Kurdistan Workers Party (PKK) rose immensely during the second half of the 1980s and the first half of the 1990s.

The years following the military coup of 1980 have been those where the Turkish modernity project with its state-centric version of Turkish modernity began to face a serious crisis. Since the beginning of the 1990s, the Turkish Constitutional Court has closed down Kurdish political parties[1]. Kurds could not participate in the political system because of the unrelenting suppression of the Turkish state and their politics of identity has become a movement pushed outside the system, leading to political violence. Whenever the Kurdish question was mentioned in Turkish state discourse, it was couched in terms of reactionary politics, tribal resistance or regional backwardness, but never raised as an ethno-political question.

The Turkish Republic’s modernization policies, like many other modernization projects, identified women as “the transmitter of cultural heritage” and gave them the duty of carrying on patriarchal traditions to create an identity around which the one nation could converge. Positioning the modern Turkish woman as the emancipated mother was an important step to cut the links between Ottoman and Turkish society, as if that could ever be done. Women, especially from the big and symbolic western cities such as Istanbul, Ankara and İzmir were shunted to the forefront to pose as the modern face of the Republic, rapidly adapting to the changes introduced with the Kemalist revolutions, such as the adoption of the new Latin alphabet and the western code of dressing. Women’s participation in political life, especially with the 1934 law that authorized the right to election and to vote for women, enforced this role model of ‘the modern society’.

Yet for a variety of reasons, the same privileges did not apply to Kurdish women. First, the development policies of the young Republic had not yet been introduced into the Kurdish regions. While both developmental policies and the patriarchal nature of the society are shared by Kurds and Turks alike, although not in the same proportions, the most important tool that disabled Kurdish women from modernizing the way that the Turkish state envisaged was the language barrier.

Kurdish women, unable to speak Turkish in the public sphere, could not participate in the “modern world” where they could neither find a job nor become members of an association. As compulsory primary school education is in Turkish, from the Kurdish point of view, this meant that speaking Kurdish at home but being trained in Turkish at school had the effects of hampering Kurdish children’s cognitive development and decreasing their chances of moving into the higher ranks of society. Kurdish women who learned Turkish later at school could not express themselves properly, and could not participate in social and economic life. Here one might mention Bourdieu’s theory of linguistic capital. Bourdieu says that, “the ability to speak a country’s dominant language is a resource that may be helpful in gaining access to the country’s desirable rewards and positions”[2]. Thus, non-Turkish speaking women were employed in the formal economy less, their husbands had lower educational levels and occupations, and they had lower family incomes.

Under the heavy pressure of Turkish cultural and ethnic homogenization and denial policies, especially after the coup of 1980, Kurdish women have not only started to claim their own Kurdish identity but they also developed a feminist consciousness in response to the male-chauvinist attitudes of Kurdish men within their national struggle. In this period, human rights violations by the State, systemic evacuation of Kurdish villages, torture and the extrajudicial killings of hundreds of Kurdish politicians, activists, journalists, lawyers and intellectuals were at its apogee. Under these circumstances, Kurdish women were politicized.

Not only did more women join the PKK ranks during this period, but they also became more active in the movement through different initiatives such as Saturday Mothers and Peace Mothers[3] – bringing public attention to the extra-judicial killings in the region and demanding peace. It has to be underlined that it was in response to the oppressive policies of the Turkish Republic that Kurdish women learnt how to raise their voices, make social and political demands by formulating claims to be in the vanguard of their own society, and discovered their own strength through their politicization.

Abdullah Öcalan and the PAJK

Here it is also important to see how the PKK, and specifically the discourse of its leader, Abdullah Öcalan contributed to women’s emancipation and empowerment in the Kurdish movement. Since PKK beginnings, Öcalan supported women as the nation’s founders. It was in 1987 that the Union of the Patriotic Women of Kurdistan (Yekitiya Jinen Welatparezen Kurdistan, YJWK) was founded as part of the political party. By 1995, the military branch composed exclusively of female combatants was founded – the Free Women of Kurdistan Troops (Yekitiya Jinen Azad a Kurdistan, YJAK). One explanation for the foundation of these troops is the Kurdish women’s demand to be seen as peers with men within the movement. Through self-sacrifice with suicide bombings or self-immolations, Kurdish women in the PKK tried to demonstrate their strength and their will to participate in their national struggle gaining equality with men within Kurdish society through the PKK and its militancy.

Then in 1999, within the PKK, the Party of Women Workers of Kurdistan, then named PJKK, but now named the Party of Free Women of Kurdistan, PAJK, was founded. Since 2000, a Free Women’s Academy has been active in Iraqi Kurdistan, which provides training for female and male militants to improve their political and military competences from a feminist perspective.

In addition to these institutional mechanisms created within the party, practises were brought in in the camps of the sharing of house-work. Öcalan elected to make the Kurdish woman an important part of the liberation movement, the Kurdish resistance and national “awakening”. This is openly expressed in PKK publications where, it is said of Öcalan that, “he started this awakening with the most important link of the chain, the woman, since she is the first to produce and create. This is why her awakening (…) signifies the dawn of a new era. The awakening of the woman in Mesopotamia means the people’s awakening and taking control”.

It was not only Öcalan’s discourse that brought about Kurdish women’s politicization. Women who bore the burdens of underdevelopment, suffered from deaths of family members like husbands, sons or lovers, had to do all the care work for the extended families and they found that the only way to improve their situation was to take matters in their hands and “fight” for peace. The homogenization and assimilation policies of the Turkish state hurting women most gave way to emancipation and empowerment of women on an unprecedented scale. Many women became activists after living through big losses and losing loved ones or right after going into jail themselves.

As we have seen, the Kurdish women’s history of struggle is not a recent phenomenon. The last generation of Kurdish women grew up recognizing women fighters as a natural element of Kurdish identity. But before that, in the late nineteenth century, there was Kara Fatma, a Kurdish woman who led a battalion of almost 700 men in the Ottoman Empire, as well as Halima Khanim of Hakkari who was the ruler of Bash Kala or Adela Khanim, ruler of Halabja near the Turco-Iranian border.

Maya Arakon is an Associate Professor at the Department of International Relations of Süleyman Şah University in Istanbul, Turkey. Her work is mainly focused on the Kurdish question in Turkey, identity, citizenship, human rights, minority rights and the European Union. She is a member of Turkey’s Peace Assembly, Women for Peace Initiative, International Women’s Peace Group and Global Coalition for Peace and Justice.