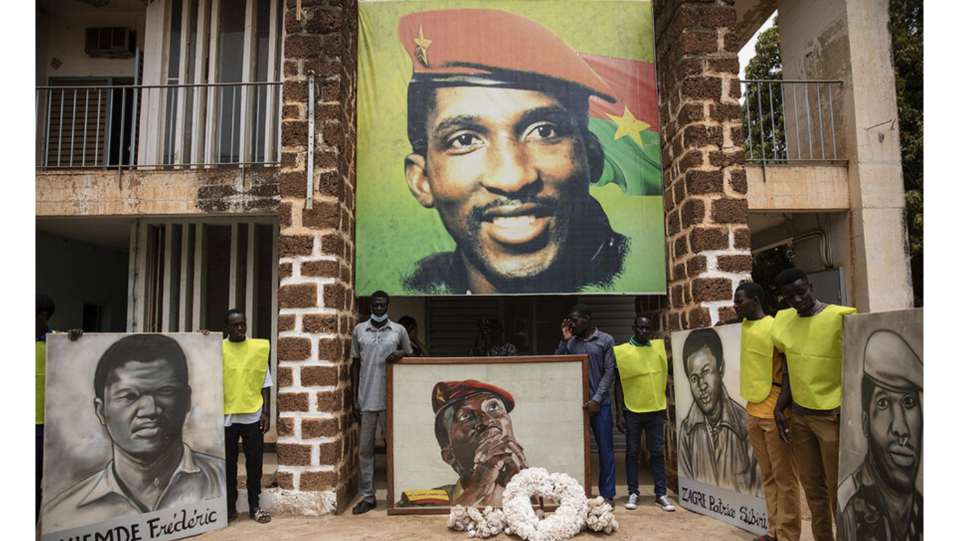 People gather for a wreath laying ceremony in front of the building where Thomas Sankara was assassinated in 1987 in Ouagadougou, Burkina Faso, April 6, 2022, after the verdict of the trial of his assassins. | Sophie Garcia / AP

Thirty-five years ago this month, one of Africa’s greatest revolutionaries was murdered by former comrades.

“Africa’s Che Guevara,” as he was known, was shot down in a coup d’etat by soldiers who were rebelling against his socialist transformation of Burkina Faso, a landlocked and poor remnant of the French colonial empire in West Africa.

He is less well known than Che, but his legacy across Africa is immense. T-shirts with his image still appear all over Africa on demonstrations, picket lines, and protests, but of course he is much less celebrated in the West.

Capitaine Thomas Sankara became president at the age of 33 in 1983 after a popular uprising freed him from prison following disputes with a previous government. His four years in power completely changed the lives of the people of Burkina Faso.

A long-time admirer of the Cuban Revolution, he led the country away from the ongoing misery of the domination of French imperialism. One of the most symbolic such moves was the renaming of the country. Previously known by its French colonial name, Upper Volta, it became known as Burkina Faso (“Land of Incorruptible People”) when he became president.

He led an unprecedented vaccine program against yellow fever and meningitis that saved the lives of over 50,000 children annually; he led the campaign to plant over 10 million trees to halt a deforestation disaster; and his government banned genital mutilation, forced polygamy, and forced marriages.

He set up Cuban-style democratic “Committees for the Defense of the Revolution” and created revolutionary tribunals to try government officials for corruption.

School attendance went up from 6% to 22% in four years, homes were built, and the powers of tribal elders were stripped back to present a fairer and more democratic society. His government ended the powers of tribal leaders to retain forced labor and tribute payments, confronting head-on the many legacies of feudal-style social systems previously engendered by French colonialists.

In particular, the image of women in society was completely transformed. It was this that set him apart even from many other African liberation fighters.

Sankara appointed many women to senior government posts and even senior military positions inside the armed forces. He promoted contraception and introduced a “men’s market day” as an effort to reduce women being pressured to constantly visit markets to buy food for the family; his government insisted on certain days when only men should do the task.

His foreign policy was principled and progressive, offering support for the Palestinian people and the fight against apartheid in South Africa.

He developed close links with Cuba and campaigned hard for African independence from former colonial powers. The latter brought him directly into conflict with President François Mitterand of France, who continued to try and rule Burkina Faso though economic domination.

This also led him into conflict with client African states of France, such as neighbouring Ivory Coast, from where the coup against him was organised.

His position on the resistance to colonialism was summed up in the statement: “We have to work at decolonizing our mentality and achieving happiness within the limits of sacrifice we should be willing to make. We have to recondition our people to accept themselves as they are, to not be ashamed of their real situation, to be satisfied with it, to glory in it, even.”

He lived in a different manner and style to many African leaders. He scrapped all government BMW cars and replaced them with Renault 5 cars, and he was often seen jogging, playing football,l and playing guitar out in public.

His lack of concern for his personal safety was not arrogance, just an assumption that he posed no threat to the people of Burkina Faso.

Sankara was brutally assassinated, however, on Oct. 15, 1987, along with 12 comrades with whom he was meeting. His body was riddled with 20 bullets by assassins acting under the supervision and support of the governments of France and Ivory Coast.

The politics of Sankara’s revolutionary government were a severe challenge to French post-colonial rule in Africa and, in particular, in the enormous economy of neighbouring Ivory Coast.

Mitterand famously visited Burkina Faso and Sankara in November 1986. His attempts to patronize and dominate the young African leader backfired publicly, as Sankara refused to accept the “advice” of the French government.

In retaliation, France supported an invasion of Burkina Faso by 150 tanks of the Malian army and encouraged hostility and subversion by Morocco and other client states of the so-called French African Union.

Despite this organized subversion and aggression, Sankara continued to be an inspiration to Africans everywhere. It was this, sadly, that led to his violent death.

He had insisted that there be no public portraits of him in government buildings. When asked why, he said: “There are seven million Thomas Sankaras in Burkina Faso.”

His grave site in Ouagadougou is smashed up and destroyed, the stones of it scattered across a desolate cemetery. His body was for years subject to a battle over exhumation.

Eventually, in April 2021, former President Blaise Campoare was found guilty of Sankara’s murder and sentenced to life imprisonment in absentia.

Campoare became president after the assassination and ruled Burkina Faso for over 30 years, overturning all of the socialist programs Sankara had initiated. He has lived in Ivory Coast since fleeing there in 2014.

The four years of Sankara rule was and still is a huge inspiration to African comrades. His grave is desecrated by those who oppose liberation. Sankara will be mourned again across Africa and around the world.

As he said, “When the people stand up, imperialism trembles.”