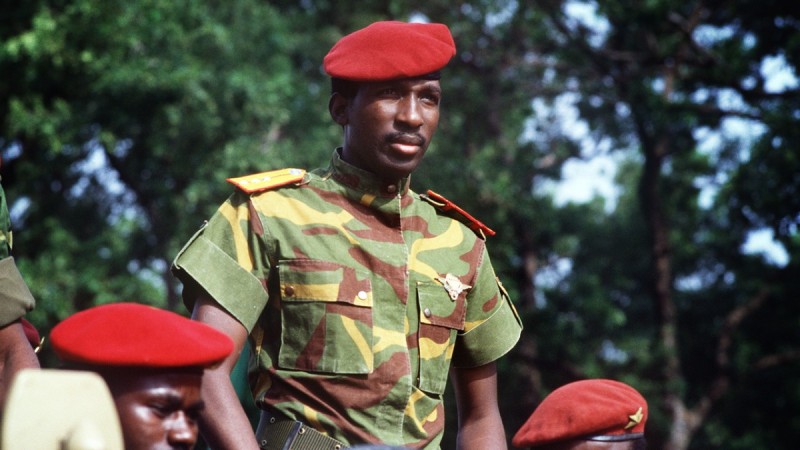 This file photograph shows Thomas Sankara as he reviews troops in a street of Ouagadougou, during celebrations of the second anniversary of the Burkina Faso’s revolution. Photo by Daniel Lane/AP.

His vision of a socialist, pan-Africanist model of development⁠ was not buried with him

“We encourage aid that aids us in doing away with aid,” asserted Thomas Sankara, president of Burkina Faso from 1983 to 1987. “But in general welfare and aid policies have only ended up disorganizing us, thus beguiling us and robbing us of a sense of responsibility for our own economic, political and cultural affairs.”

In order to restore that sense of responsibility, Sankara implemented a socialist, anti-imperialist agenda aimed at cultivating a self-sufficient economy run by the Burkinabè people, for the Burkinabè people. His agenda included, among other things, refusal to pay Burkina Faso’s debts to Western-run institutions on the grounds that, one, it was illegitimately accrued, and two, constant debt serving was anathema to African development.

As ideologically void military coups rock Burkina Faso and the debt crisis across the African continent grows more urgent by the year, the Burkinabè people are readying to commemorate Sankara on the thirty-fifth anniversary of his assassination. Sankara’s four years in power proved that alternative development models that do not subscribe to the imported precepts of neocolonial institutions are not only possible, but necessary if underdeveloped nations want to develop in endogenous and sustainable ways.

When Sankara seized power in 1983, his government represented a radical break from the past. Named “Upper Volta” by the French and underdeveloped in a classic colonial fashion, formal independence brought little material change to the country. A series of puppet rulers kept the country in France’s neocolonial dominion, while the majority of Upper Volta’s population remained undereducated and undernourished. When Sankara, a military captain who espoused the tenets of Marxism-Leninism, took power in a coup, continent-wide hopes for African socialism were reinvigorated. The Zanzibarian socialist A.M. Babu summed up the hopeful feeling:

Captain Thomas Sankara… can be instrumental in reviving that post-colonial enthusiasm which most people had hoped would be rekindled by [Mugabe’s] Zimbabwe but was not; the enthusiasm that cleared bushes, built thousands of miles of modern roads, that dug canals on the basis of free labour and the spirit of nation-building.

A man of informal style and modest values, Sankara nevertheless espoused an ambitious development program for the African continent. Firstly, he renamed his country from Upper Volta to Burkina Faso⁠—“the land of upright people”⁠—and nationalized the majority of its resources, most importantly the farmland and mineral reserves. He launched a series of “commando” operations to build a nation-spanning railroad (the people constructed almost 100 kilometres of railway in two years), increase literacy in the countryside (tens of thousands were taught to read), and vaccinate children against measles, meningitis, and yellow fever (two million children were vaccinated in two weeks, saving 18,000 to 50,000 kids who usually died in the yearly epidemics). All these initiatives were undertaken without accepting funds from international financial institutions or encouraging foreign investment.

“We don’t want anything from anyone,” said Foreign Minister Basile Guissou. “No one will come to develop Burkina Faso in place of its own people.” At a time when Africa’s debt was around $200 billion and 40 percent of the continent’s export earnings were going toward debt payments, this was a brave stance to take. Sankara went one step further when, in 1987, he urged the rest of Africa to reject its foreign debt and follow Burkina Faso’s successful model of self-sufficiency.

Sankara’s goal was to ensure the population’s access to food and clean drinking water, a basic but demanding ambition on a continent where hunger and thirst were enforced on whole peoples through the financial institutions and foreign policy agendas of the “civilized” Western world. “Our economic ambition,” he said, “is to use the strength of the people of Burkina Faso to provide, for all, two meals a day and drinking water.”

His policies bore fruit. Between 1983 and 1986, cereal production rose 75 percent and the new Ministry of Water helped many communities dig wells and water reservoirs. Journalist Ernest Harsch recalls: “Ordinary Burkinabè seemed to readily embrace Sankara’s approach, as they mobilized in their local communities to quickly build new schools, health clinics, and other facilities that had once seemed but a remote fantasy.”

Sankara’s independent development policies, combined with a non-aligned foreign policy that saw him enjoy good relations with Cuba, Libya, and the Soviet Union, led the Europeans (and particularly the French) to turn against the revolutionary government. Much like other revolutionary processes in Cuba and Venezuela, Sankara’s government was successfully implementing a new development strategy that spurned the racist paternalism and interventionist austerity of Western financial institutions in favour of a model of self-sufficiency rooted in popular mobilization. Moreover, Sankara demanded respect from the Global North, and especially from Burkina Faso’s former colonizer. “What is essential,” he stated, “is to develop a relationship of equals, mutually beneficial, without paternalism on one side or an inferiority complex on the other.”

The French government’s attitude toward Sankara grew increasingly negative during his time in power. For example, during a brief border war between Mali and Burkina Faso in 1985, France sold weapons to Mali. Overall, Sankara had deprived France of influence in West Africa, and the success of his alternative path portended an even greater diminishment of French influence as other peoples in the region would likely realize that self-sufficiency was possible. As such, the French retained close ties with conservative governments in neighbouring Togo and Côte d’Ivoire, especially the Ivorian president Félix Houphouët-Boigny, whose country was home to many Burkinabè exiles who opposed the Burkinabè revolution.

When Sankara traveled to Côte d’Ivoire in May 1984, he was initially banned from visiting Abidjan, the largest city, because Ivorian authorities were worried he would be welcomed more enthusiastically than the country’s own president.

Everything fell apart on October 15, 1987, when former Sankara compatriot Blaise Compaoré launched a coup of his own. His soldiers murdered Sankara and his closest allies and unceremoniously buried their bodies in a mass grave. Harsch reported that, when word of Sankara’s death spread, mourners flocked to the mound to lay flowers and weep.

Compaoré ruled until 2014. Some of his earliest actions included reversing the state monopoly on the mining industry and allowing the International Monetary Fund and the World to return to the country. “Without shame, we must appeal to private investors,” he announced in a clear break from Sankara. “We need to develop capitalism… We have never considered socialism.”

In further contrast to his predecessor, Compaoré built an opulent presidential palace and purchased a luxury jet once owned by Michael Jackson. The West’s immediate embrace of Compaoré and the new leader’s closeness to France (and particularly French ally Félix Houphouët-Boigny) have fed theories that the coup was launched at the behest of Burkina Faso’s former colonizer. To this day, the French government refuses to open its archives on Sankara.

By the late 1990s, foreign exploration teams had discovered huge gold reserves in Burkina Faso. Canada, with its growing investments in gold, was especially interested. By 2003, the following Canadian companies were exploring or developing mines in Burkina Faso: Axmin, Orezone Resources, Etruscan Resources, St. Jude Resources, SEMAFO, and High River Gold. Within fewer than twenty years, Canadian interests would own the majority of gold operations in the country, dominating Burkina Faso’s most profitable export.

In 2014, a popular uprising overthrew Compaoré, bringing an end to decades of openly neocolonial rule. However, the political process that followed failed to break with the past as Sankara would have advised. Canadian pressure was instrumental in preventing substantial reform. As Business Monitor Online explained, “Burkina Faso is heavily dependent on foreign aid, much of it from Canada, the home jurisdiction of most of the miners that would be hurt by significant review.” Former Prime Minister Stephen Harper further protected Canadian investments by finalizing a Foreign Investment Promotion and Protection Agreement (FIPA), negotiated with the Compaoré regime, while the unelected transition government was in power.

A 2015 meeting between Prime Minister Justin Trudeau and former President Roch Marc Christian Kaboré revealed the continuing prevalence of Canadian capital in the country today. As Canadian mining investments in Burkina Faso and all West Africa continued to rise, Kaboré shook hands with Trudeau and “underscored the importance of Canadian investments to Burkina Faso’s economy.”

This year, Burkina Faso has been the site of two military coups. The first, on January 24, overthrew Kaboré and brought officer Paul-Henri Sandaogo Damiba to power, and the second, on September 30, dislodged Damiba and elevated officer Ibrahim Traore to the head of the military regime. Neither of these coups impacted Canadian investment in the country. An October 3 article in Canadian Mining Journal notes that operations owned by Canada’s Endeavor Mining and IAMGOLD “have not been affected by spreading social unrest following an internal coup d’état.”

Sankara’s vision of an independent, socialist, pan-Africanist model of development⁠—one in which wealth produced in Africa remains in Africa to develop the majority of the population⁠—was not buried with him. He remains an inspiring symbol for people in Africa and beyond. In a recent interview with Democracy Now!, Aziz Fall, coordinator for the International Campaign Justice for Sankara, explained that Sankara “symbolized for most African youths the hope of a sovereign Africa. He actually gave his life for that… And so he’s an icon, I think.”

Owen Schalk is a writer based in Winnipeg. He is primarily interested in applying theories of imperialism, neocolonialism, and underdevelopment to global capitalism and Canada’s role therein. Visit his website at http://www.owenschalk.com.