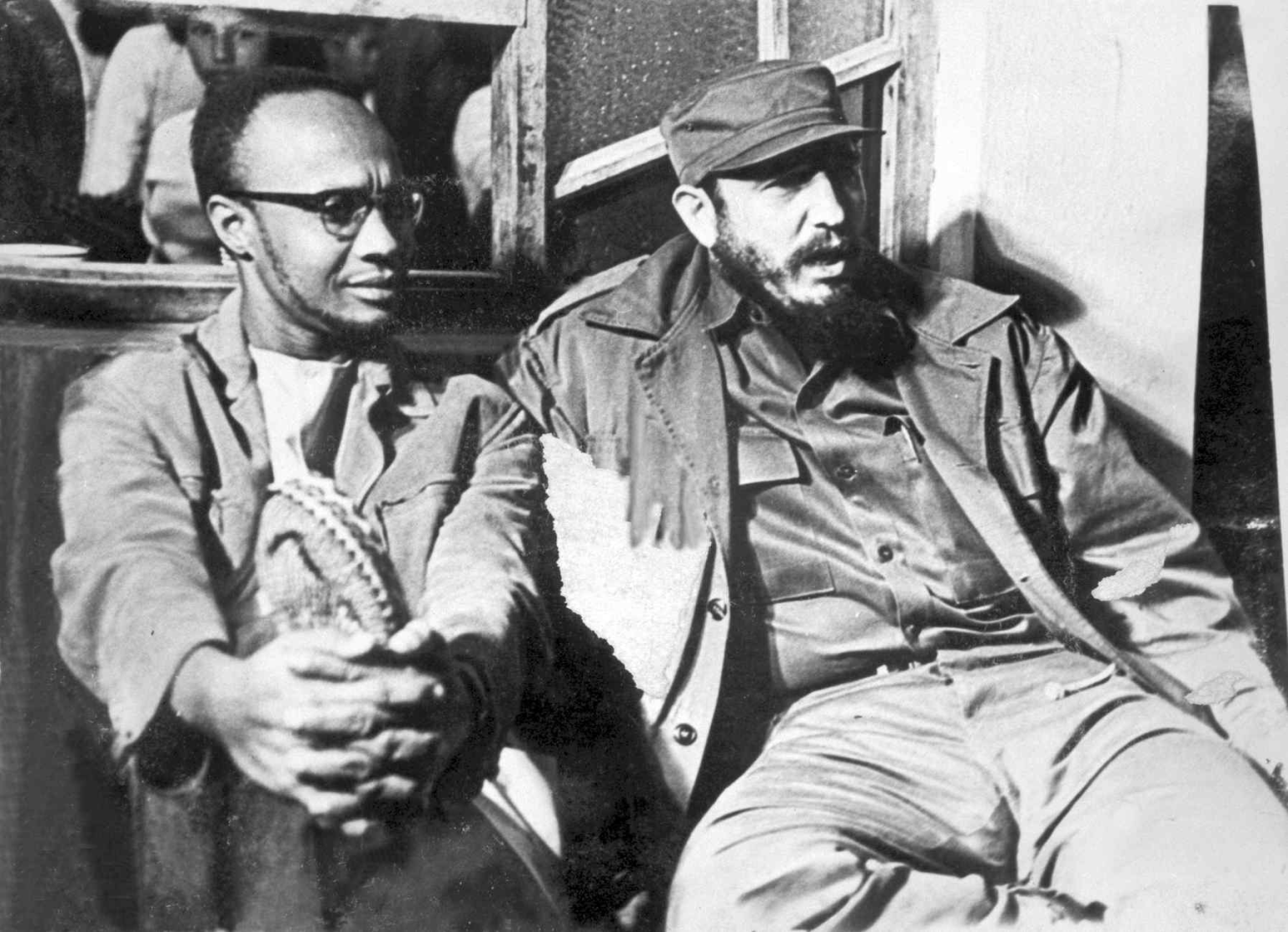 In a speech delivered to the First Solidarity Conference of the Peoples of Africa, Asia, and Latin America held in Havana in January 1966, Cabral posed the question: “does history begin only from the moment of the launching of the phenomenon of class, and consequently, of class struggle?[1] Cabral raised this question because he is concerned with the fact that maintaining the thesis that the existence of classes is a necessary condition for the existence of dynamic social processes logically commits one to excluding several peoples from the historical process, provided that one accepts that at least some societies were classless until they came into contact with European imperialists. The latter is an assumption that is shared by Cabral and his interlocutors. Of course, in order to understand what Cabral is asking here we have to understand what is meant by the word ‘history’ in this context. I think that if one takes into account the Marxist polemical context that Cabral is wading into with this speech, and his attempt to develop a version of historical materialism that would be suitable for conditions in Guinea-Bissau and Cape Verde, one would be justified in thinking that Cabral is referring to a process of social development (or even progress). In other words, the question at hand is not whether peoples without classes have a past, they obviously do. The question is whether they have lived in societies that were dynamic, and where such dynamism could lead to qualitative transformations in social relations such that one could describe those societies as having specific developmental trajectories. Cabral wants to argue that they did in fact live in societies that were dynamic, even if such societies did not contain classes.

Cabral believed that at least some peoples in Guinea-Bissau, such as the Balanta, lived in a classless society before the advent of Portuguese colonialism, and to some extent even after colonialism.[2] Since Cabral thinks that such horizontal societies existed across Africa, Asia, and Latin America before the advent of colonialism, he believes that to maintain that the existence of class struggle, and consequently of classes, is a necessary condition for the existence of a dynamic society is to deny that those peoples who lived in horizontal societies lived in dynamic societies. As he put it: “It would also be to consider – and this we refuse to accept – that various human groups in Africa, Asia and Latin America were living without history or outside history at the moment when they were subjected to the yoke of imperialism. It would be to consider that the populations our countries, such as the Balanta of Guiné, the Cuanhama of Angola and the Makonde of Mozambique, are still living today – if we abstract the very slight influence of colonialism to which they have been subjected –  outside history, or that they have no history”.[3] The view that Cabral rejects was upheld by the prominent Marxist Hungarian Africanist, Endre Sik, who in 1966, said of the people who inhabited the Guinea Coast that “we cannot speak of their history prior to the end of the 15th century”.[4] Sik essentially wrote African history as if it was only the history of European imperialism in Africa.[5] Sik’s view converged with the views of some colonial bureaucrats like Sydney Caine who also believed that  all African societies are characterized by a “social structure. . .[which] is inimical to change”.[6] We can understand Cabral as arguing that the convergence between the views of Sik and the views of colonial officials is a result of Sik’s misunderstanding of what historical materialism entails.

Cabral rejects the reduction of historical materialism to a theory of class struggle and instead he stresses the centrality of the concept of a “mode of production”. According to Cabral,the main cause of historical changes in a given social formation is to be located in the mode of production characteristic of that social formation. Cabral defines the mode of production of a given society as the combination of “the level of productive forces and the system of ownership” that is characteristic of a given social formation or society.[7] It might be tempting to read Cabral as some kind of technological determinist, as Makungu M. Akinyela does.[8] For he says that “the level of productive forces, the essential determinant of the content and form of class struggle, is the true and permanent motive force of history”.[9] However, when we reflect carefully upon the manner in which Cabral speaks of the importance of political factors in bringing about social transformations, we recognize that this cannot be a correct reading of Cabral. Cabral argues that it is not necessary to go through all the stages (in terms of sequences of modes of production) that characterized historical developments in Western Europe. He argues that “such progress depends on the specific possibilities for the development of the society’s productive forces and is mainly conditional on the nature of the political power ruling that society, that is on the type of State or, if we like, on the nature of the dominant class or classes within society” [my emphasis].[10] Cabral clearly thinks that societal change and transformation is not just exclusively driven by the growth of productive forces. Rather it is driven by the mode of production as a whole. Note that a technological determinist reading of Cabral cannot even get off the ground because Cabral does not seem to have identified productive forces exclusively with technology. If we refer to his practices as an agronomist, [11] It is clear that Cabral did not think that improving the productive forces simply meant introducing new more efficient technology, Cabral thought that the ways in which humans cooperated with one another was a crucial element of the productive forces. In this respect, he is in agreement with Marx and Engels.[12]

Author’s Bio: Zeyad el Nabolsy is a PhD candidate in Africana Studies at Cornell University. He works on African philosophy of culture, African Marxism, the history and philosophy of science in the context of modern African intellectual history, and history and sociology of philosophy in the context of global intellectual history. His work has appeared in Science & Society, The Journal of African Cultural Studies, The Journal of Historical Sociology, Problemata: Revista Internacional de Filosofía, Kant Studies Online, Liberated Texts, Jadaliyya, among others. He can be contacted by email at ze44@cornell.edu. His Twitter handle is: @ZNabolsy

Bigman, Laura. 1993. History and Hunger in West Africa: Food Production and Entitlement in

Cabral, Amílcar. 1971. Our People Are Our Mountains: Amílcar Cabral on the Guinean Revolution. London: Committee for Freedom in Mozambique, Angola, and Guinea.

Campbell, Horace. 2006. “Re-visiting the Theories and Practices of Amilcar Cabral in the Context of the Exhaustion of the Patriarchal Model of African Liberation.” In The Life, Thought, and Legacy of Cape Verde’s Freedom Fighter, Amilcar Cabral (1924-1973): Essays on his Liberation Philosophy, edited by John Fobanjong and Thomas Ranuga, 79-102. Lewiston, NY: Edwin Mellen Press.

Chabal, Patrick. 1981. “The Social and Political Thought of Amílcar Cabral: A Reassessment.” The Journal of Modern African Studies, 19.1: 31-56.

Gomes, Crispina. 2006. “The Women of Guinea Bissau and Cape Verde in the Struggle for National Independence.” In The Life, Thought, and Legacy of Cape Verde’s Freedom Fighter, Amilcar Cabral (1924-1973): Essays on his Liberation Philosophy, edited by John Fobanjong and Thomas Ranuga, 69-78. Lewiston, NY: Edwin Mellen Press.

Ly, Aliou. 2018. “Amílcar Cabral and the Bissau Revolution in Exile: Women and the Salvation of the Nationalist Organization in Guinea, 1959-1962.” In African in Exile: Mobility, Law, and Identity, edited by Nathan Riley Carpenter and Benjamin N. Lawrance, 153-166. Bloomington, IN: Indiana University Press.

Rudebeck, Lars. 1997. “‘To Seek Happiness’: Development in a West African Village in the Era of Democratisation.” Review of African Political Economy71:75-86.

Stefanos, Asgedet. 1997. “African Women and Revolutionary Change: A Freirian and

Táíwò,Olúfẹ́mi. 1999. “Cabral.” In A Companion to the Philosophers, edited by Robert Arrigton, 5-12.: Blackwell: Malden, MA.

Wolf, Eric. 1982. Europe and the Peoples without History. Berkeley and Los Angeles: University of California Press.

[11] Carlos, Schwarz, “Amílcar Cabral: An Agronomist before His Time,” In Claim No Easy Victories: The Legacy of Amilcar Cabral, ed. by Firoze Manji and Bill Fletcher Jr., (Dakar and Montreal: CODESRIA and Daraja Press, 2013), 86.