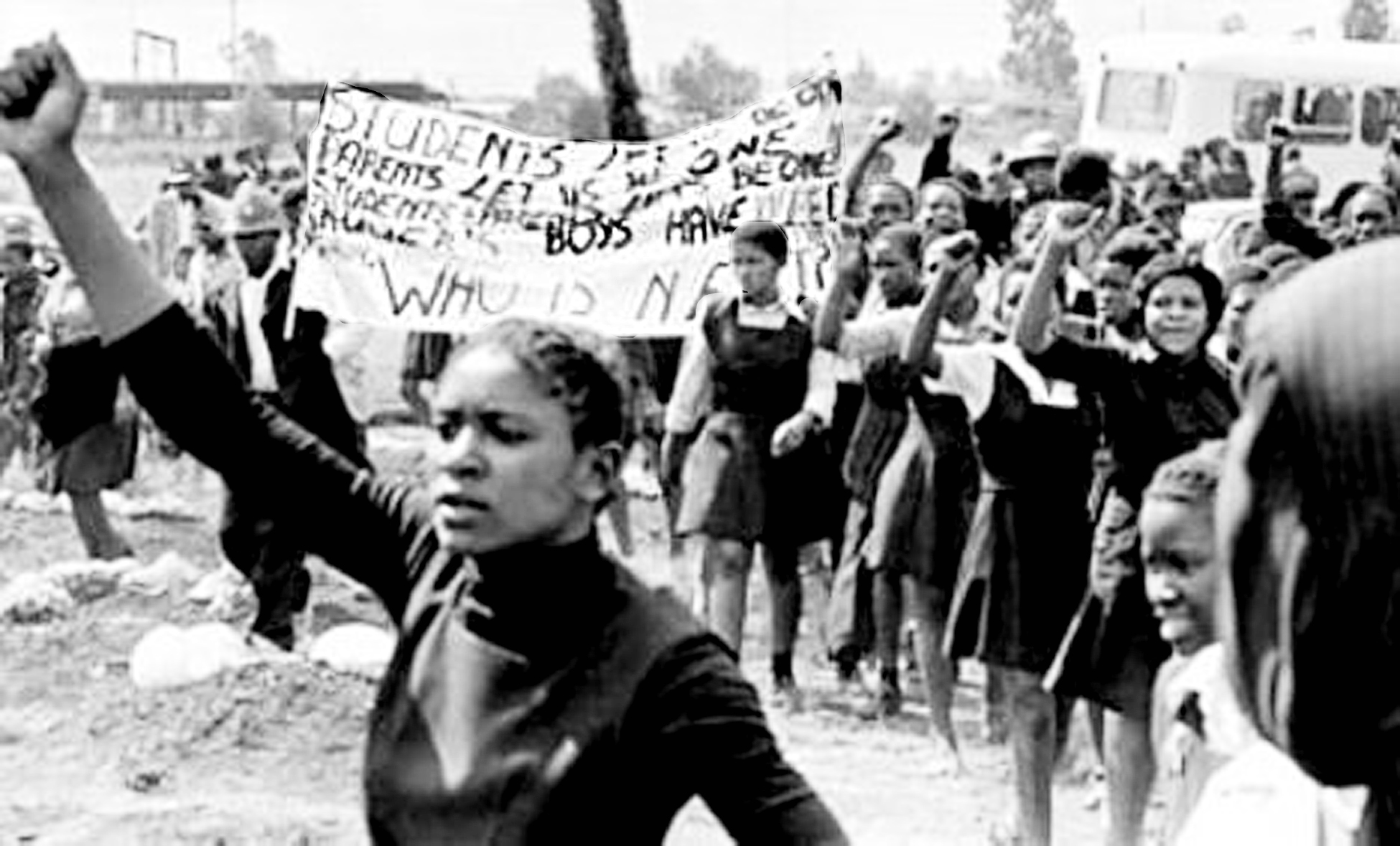 The 1976 Uprising was partly a visceral popular reaction to the oppression and dispossession of the colonial system and the apartheid one that followed it, but the Uprising was also the result of a strengthening of organized resistance movements within South Africa: the Black Consciousness Movement, the political work of the banned ANC (of Nelson Mandela) and PAC (Pan-African Congress) parties, and particularly the South African Students Organisation.

A 1974 regulation made two colonizers’ languages — the reviled Afrikaans language, in addition to the equally despised English, compulsory in schools for Indigenous South Africans. On June 16, 1976, thousands of students mobilized to demonstrate peacefully against the new laws. Their march was met by heavily armed police who fired live ammunition on the students.

“On June 16, 1976, fifteen thousand schoolchildren gathered in Soweto to protest the government’s ruling that half of all classes in secondary schools must be taught in Afrikaans,” recalled Mandela, who was locked in Robben island prison at the time. “Students did not want to learn and teachers did not want to teach in the language of the oppressor. Pleadings and petitions by parents and teachers had fallen on deaf ears. A detachment of police confronted this army of earnest schoolchildren and without warning opened fire.” At least 175 South Africans, mostly students, were killed by the South African Security Forces during the June 16 massacre and in the ensuing days of rebellion. Some reports place the number of dead at about 700.

“The events of that day reverberated in every town and township of South Africa,” Mandela explained in his autobiography. “The uprising triggered riots and violence across the country. Mass funerals for the victims of state violence became national rallying points. Suddenly the young people of South Africa were fired with the spirit of protest and rebellion. Students boycotted schools all across the country.”

In apartheid South Africa “townships” were racially segregated urban neighborhoods where the subjugated people, namely Indigenous Black South Africans, but also Indians (brought to work South Africa’s fields as “indentured labourers” by the British colonialists) and those classified as “Coloureds,” lived in great poverty. They were only allowed to leave the townships if they showed a “pass card,” and they had no legitimate citizen rights. Technically all Black South Africans “belonged” to one of 10 Bantustans (reserves), which in total constituted about 10% of the South African country’s land. In practice most of them lived outside of the Bantustans. While this “reserve” system had been in place since British colonialism in the 19th century, it was more strongly entrenched in law in 1948 with the start of the apartheid era (apartheid=”separateness,” “aparthood,” or segregation, in Afrikaans).

Steve Biko was one of the most influential spokespeople of the Black Consciousness movement and a hero to young Black South Africans finding their political courage at that time. Writer and activist, Biko was killed 15 months after the Uprising, at age 30, by the South African police. During one of his last interviews, in early 1977, he spoke about the Soweto Uprising:

“The response of the students then was in terms of their pride. They were not prepared to be calmed down even at the point of a gun. And hence, what happened, happened. Some people were killed. These riots just continued and continued. Because at no stage were the young students — nor for that matter at some stage their parents — prepared to be scared. Everybody saw this as a deliberate act of oppressive measures to try and calm down the black masses, and everybody was determined equally to say to the police, to say to the government: ‘we shall not be scared by your police, by your dogs and by your soldiers.’ Now this is the kind of lack of fear one is talking about which I see is a very important determinant in political action.”

The 1960 Sharpeville massacre and the 1976 Soweto Uprising and were two key events in the history of the apartheid regime both nationally and internationally. The courage, resilience and resistance of South Africans faced with a brutal murderous system, and the disgust and anger that these killings inspired around the world, were key elements in the eventual dismantling of apartheid.

Music is a Weapon

Many works of art and music have memorialized the Soweto Uprising. For example, Afro-beat star Fela Kuti wrote two songs immediately after inspired by the events and by similar incidents of police violence in Nigeria: “Sorrow Tears and Blood” (“them leave sorrow tears and blood — them regular trademark”) and “Colonial Mentality.”

The title of Rage Against the Machine’s “Township Rebellion” (“when ignorance reigns life is lost”) is assumed to be a reference to the 1976 Soweto Township’s Uprising.

Miriam Makeba’s haunting “Soweto Blues,” written by South Africa’s Hugh Masekela immediately after the events and released in 1977, is a poignant description of the massacre (“where were you men, when the children were throwing stones?”). Makeba, born in Prospect Township in Johannesburg, South Africa, used her platform as a world famous singer to speak out against apartheid starting in 1960, in the wake of the Sharpeville massacre. After speaking out against the injustice of apartheid she was banned from South Africa and her passport was revoked. She lived in exile for 31 years until, after Mandela’s release from prison, she was able to return to her homeland and perform “Soweto Blues” onstage for a crowd of her fellow South Africans. In this clip you hear the song and Makeba’s commentary about it, about Mandela, and about the end of the apartheid system.

Perhaps this is a good place to recall that the apartheid system in South Africa began the same year — 1948 — as the apartheid state of isn’t-real unilaterally declared itself as a Jewish “nation” and dispossessed almost a million Palestinian peoples from their native lands during the Nakba ethnic cleansing catastrophe. This system too shall fall.

When I read about the Soweto Uprising today, I recall the ongoing events in Colombia. Disenfranchised, neglected workers and youth of the country have been standing up since the national strike began on April 28, putting their lives at great risk against a murderous regime that cares nothing for their lands and communities. At least 75 have been killed by the police and hundreds have been “disappeared” resisting the neoliberal regime of the US vassal state — the South American israel, as it has been called, due to the huge amount of US military aid Colombia receives, and because its police and army are trained by officers of the Jewish supremacist state.

Long live the victims of the Soweto Uprising! Their resistance was not in vain. History marches ever forward.