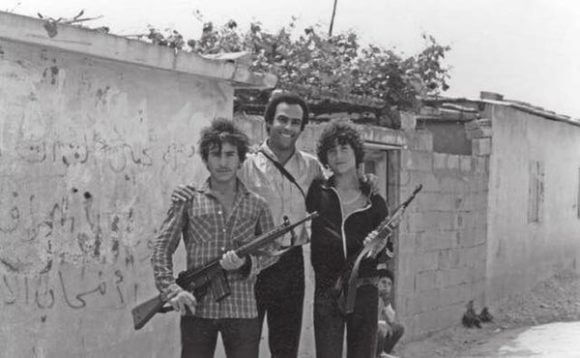 The following article by Greg Thomas, the curator of “George Jackson in the Sun of Palestine,” was published in Ittijah, a new Arabic-language publication by Palestinian youth issued by Nabd, the Palestinian Youth Forum.  Dr. Greg Thomas is Associate Professor of Black Studies & English Literature at Tufts University, who crafted the exhibition, displayed first at the Abu Jihad Museum in occupied Palestine and then in Oakland and in several other US locations. The exhibition “includes drawings, woodcuts, political posters and other art tied to Jackson’s life and the Palestinian and U.S. prisoners’ movements, letters of solidarity between Palestinian and American prisoners, letters from Jackson and coverage of his life and death, photos of Palestinian art from the Apartheid Wall, and other artifacts tying the movements together.” It is named for Black Panther and Soledad Brother George Jackson, murdered in 1971 in a claimed “escape attempt;” poetry by the Palestinian leader and poet, Samih al-Qasim, including “Enemy of the Sun” and “I Defy,” was found in his cell after his death. (Handwritten copies of the poems where originally misattributed to Jackson, in what Thomas refers to as a “magical mistake” born of “radical kinship” between liberation movements.)

The leader of the Black Panther Party (BPP), Huey P. Newton once wrote, “Israel was created by Western imperialism and is maintained by Western firepower.”  He likewise said that ‘America’ must die so that the world can live.  Neither Zionism nor “Americanism” would escape the wrath of these anti-colonialist/anti-racist/anti-imperialist Black Panthers, an organization founded in 1966 as the “Black Panther Party for Self-Defense” in Oakland, California.

Relatedly, by 1967, when the Student Non-Violent Coordinating Committee (SNCC) began to transform itself from a liberal civil rights organization into a radical Black nationalist organization that would rename itself the Student National Coordinating Committee, it also took a bold position in support of Palestine.  The text of SNCC’s statement was co-drafted by Stokely Carmichael, who would go on to make history as a revolutionary icon of “Black Power” and Pan-African movements for liberation.  But SNCC paid for this position dearly.  Its economic patronage by white liberalism in general and white ‘Jewish’ liberalism in particular came to a screeching halt.  Historically, like all Black people who refuse to support “Jewish” Euro-imperialism, it would be represented as a band of ungrateful savages – “anti-Semitic” and “racist in reverse,” in other words – insofar as it would refused to put white and “Jewish” interests before its own Black nationalist and internationalist interests in North America and the world at large.

Nonetheless, it was a number of ex-SNCC radicals who published Enemy of the Sun: Poetry of Palestinian Resistance in 1970 — after they had formed Drum & Spear Press in Washington D.C., and after that book project co-edited by Naseer Aruri and Edmund Ghareeb had been rejected by a dozen other publishing houses.  This was the same collection of poems seized from the cell of George Jackson (Black Panther Field Marshal), after his assassination by San Quentin prison guards on August 21, 1971: “Enemy of the Sun” by Samih al-Qasim was even mysteriously published in the Black Panther newspaper under “Comrade George’s” name in a magical “mistake” that would cement a certain Black/Palestinian connection for decades to come.

Condemning Zionist imperialism and white colonial liberalism led to no crisis for the Black Panther Party, for it was revolutionary rather than a reformist organization from its inception.  The party issued at least three official statements on Palestine and the “Middle East” in 1970, 1974, and 1980, besides anonymous Black Panther articles promoting Palestinian liberation as well as assorted PLO editorials in The Black Panther Intercommunal New Service, a periodical with a global circulation of several hundred thousand copies weekly in its run from April 25, 1967 to September 1980.

The first official BPP statement in 1970 by proclaimed, “We support the Palestinian’s just struggle for liberation one hundred percent.  We will go on doing this, and we would like for all of the progressive people of the world to join in our ranks in order to make a world in which all people can live.”  The Panthers made a point to mention that they were “in daily contact with the PLO,” provocatively, via the office that they had opened in Algiers as an “international section” of the party.  This statement was made at a press conference in 1970 and republished in 1972 as a part of To Die for the People: The Writings of Huey P. Newton.

What’s more, the BPP Minister of Defense put a sharp spin on the Zionist rhetoric of “the right to exist,” mocking its arrogance with a Black revolutionary flair:  “The Jewish people have a right to exist so long as they solely exist to down the reactionary expansionist Israeli government.”

A second statement was issued by Newton in 1974.  It would not budge from the BPP’s automatic support for Palestine.  Yet the push here was now for an Israeli retreat to 1967 borders, on the one hand, and, on the other hand, for a pan-Arab populism that would move toward a “people’s republic of the Middle East.”  This was mostly a rhetorical critique of U.S. puppet regimes in the Arab world, which is to say, their comprador betrayal of Palestine:  Elaine Brown reports that the masses of the party favored a position of complete Palestinian decolonization in any and every case.

A third official BPP statement followed Huey Newton’s trip to Lebanon in 1980.  It is a virtual conversational profile of Yasser Arafat as well.  The PLO Chairman vilified in the West was presented as an icon of peace with anti-imperialist justice in strict contrast to Menachem Begin.  In minute detail, the Panther newspaper recalls Newton’s visit to a Palestinian school, the Red Crescent Society Hospital, and the Palestine Martyrs Works Society (SAMED), suggesting a significant parallel between these PLO programs in Beirut and the “survival pending revolution” programs of the Black Panther Party in North America.  This written portrait of two revolutionary leaders and organizations in contact again conjures up some striking images found elsewhere:  Huey greeting Arafat ecstatically in an airport somewhere and Huey smiling in front of a refugee camp in Lebanon with his arms around two armed Palestinian youth.

The afterlife of the Black Panther Party is noteworthy to be sure.  Elaine Brown would proudly recap its history of Palestinian solidarity in 2015, while Kathleen Cleaver remembered in the same year that Fateh helped them construct their office (or “embassy-without-a-state”) in Algeria.  Safiya Bukhari would continue to recite Palestinian poetry in tribute to “fallen comrades,” long after George Jackson became Samih al-Qasim and Samih al-Qasim became George Jackson thanks to the party’s newspaper.  Lastly, Dhoruba Bin Wahad would be denied entry into Palestine in 2009 and briefly detained by the Israelis in Jordan.  He was en route to a conference on political prisoners and representing the “Jericho Movement to Free Political Prisoners in the U.S.”   And it is difficult to find a more radical or brilliant critic of Zionism, Negrophobia and Islamophobia in the Western Hemisphere today.

Moreover, before Stokely Carmichael moved back to Guinea and changed his name to become Kwame Ture, he was for a time affiliated with the Black Panthers as its “honorary prime minster.”  Despite their subsequent differences, he arguably became the greatest Black giant of anti-Zionism himself.  He described Palestine as “the tip of Africa” and said that he had “two dreams” (which were revolutionary, anti-Apartheid dreams in fact):  “I dream, number one, of having coffee with my wife in South Africa;  and number two, of having mint tea in Palestine.”  This means that the legacy of his as well as SNCC’s historic solidarity with Palestine can be seen as intertwined with the legacy of the Black Panthers, not to mention Malcolm X.

Indeed, when Huey P. Newton referred to the Black Panther Party as the “heirs of Malcolm X,” he could have been talking about their shared anti-Zionist stance against white racism empire.  In 1964, Malcolm made his Hajj and epic political tour of the Afro-Arab world.  He spent two days in Gaza (5-6 September), where he prayed at a local mosque, gave a press conference at the parliament building, met Harun Hashim Rashad (as May Alhassen informs us), and visited several Palestinian refugee camps.  Soon he met the first Chairman of the PLO Chairman, Ahmed Shukeiri, in Cairo – after the second Arab League Summit in Alexandria — and published his blistering polemic against “Zionist Logic” in The Egyptian Gazette (17 September 1964):  “The modern 20th century weapon of neo-imperialism is “dollarism,” he wrote:  “The Zionists have mastered the science of dollarism….  The ever-scheming European imperialists wisely placed Israel where she could geographically divide the Arab world, infiltrate and sow the seed of dissension among African leaders and also divide the Africans against the Asians.”  Here Malcolm (or, now, El Hajj Malik El Shabazz) prefigures Fayez Sayegh’s powerful booklet, Zionist Colonialism in Palestine (1965);  and he eerily portends Benjamin Netanyahu’s wretched tour of Uganda, Kenya, Rwanda and Ethiopia in 2016.  The 50th anniversary of the Black Panther Party (for Self-Defense) is thus a great time to remember the whole genealogy of a Black revolutionary tradition of opposition to Zionism and all forms of Western racism, colonialism and imperialism, perhaps especially in this special place that produced Black Panther/Fahd al-Aswad formations of own.