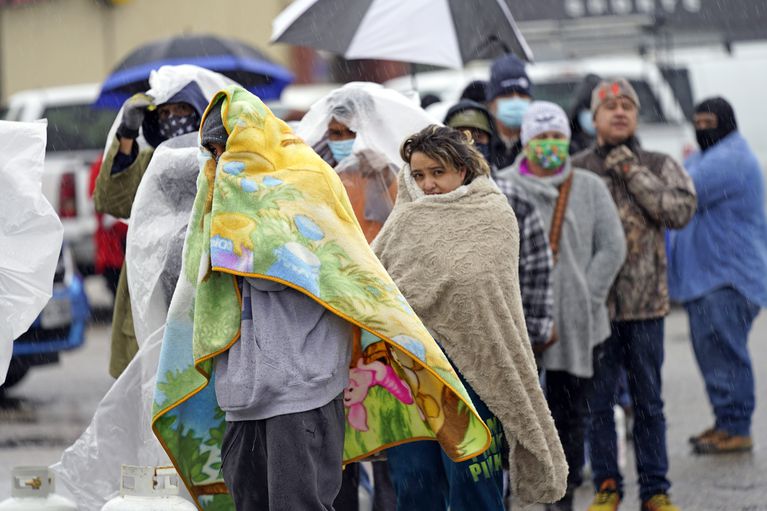 People wait in line to fill propane tanks Wednesday, Feb. 17, 2021, in Houston. Customers waited over an hour in the freezing rain to fill their tanks. Millions in Texas still had no power after a historic snowfall and single-digit temperatures created a surge of demand for electricity to warm up homes unaccustomed to such extreme lows, buckling the state’s power grid and causing widespread blackouts. | David J. Phillip / AP

In The Foundations of Leninism, Stalin concluded that “the chain of the imperialist front must, as a rule, break where the links are weaker and, at all events, not necessarily where capitalism is more developed, where there is such and such a percentage of proletarians and such and such a percentage of peasants, and so on.” In other words, the potential for proletarian revolution is increased more by the weakening of capital in a given country than by any other aspect of the material conditions.

Such is the reality that the U.S. capitalist ruling class has to reckon with as American society moves ever quicker towards social breakdown. If capital gets weakened within the country enough, an opening for a proletarian overthrow will emerge. And given the ways the environmental, geopolitical, and economic situations have been developing lately, capital is about to implode to an unprecedented extent.

Right now with the natural disasters that the country is experiencing, the class struggle is still stuck in the standard dynamic for crises under capitalism: the rich stay safe in their luxurious enclaves while the lives of the poor are sacrificed, corporations take advantage of the given tragedy by finding ways to profit off of it and further solidify their control, and the system manages to perpetuate itself. But at some point, the chain breaks. At some point, conditions for the masses grow dire enough and the bourgeoisie lose enough economic leverage for a workers revolution to be able to take place.

“Imperialism is the omnipotence of the monopolist trusts and syndicates, of the banks and the financial oligarchy, in the industrial countries,” wrote Stalin. “In the fight against this omnipotence, the customary methods of the working class-trade unions and cooperatives, parliamentary parties and the parliamentary struggle-have proved to be totally inadequate. Either place yourself at the mercy of capital, eke out a wretched existence as of old and sink lower and lower, or adopt a new weapon-this is the alternative imperialism puts before the vast masses of the proletariat. Imperialism brings the working class to revolution.” And when the position of capitalism is weakened, he continued, the only possible outcome is “the acceleration of the advent of the proletarian revolution and to the practical necessity of this revolution.”

This perfectly describes what’s happening in the U.S., as well as in the other core imperialist countries with their self-destructive embrace of neoliberal financialization. The late-stage capitalist economic model, with its heavy robbery of the proletariat to maintain rising profits, can’t be sustained. As finance commentator Concoda wrote this last week:

The elites have replaced America’s economy with “the Everything Bubble”, and it’s harder than ever to achieve the American dream. Every year, home and food prices rise, more manufacturing industries disappear overseas, and the cost of healthcare and education skyrockets. But rather than addressing these issues, the American elites have ignored them and now define their success by whether “stonks go up”…Whatever happens next, in both scenarios — a conflict between the centralists and the decentralists or the collapse of the “stonks going up” machine — our fate has been decided. We must face the future head-on and brace for the inevitable downturn.

The economic dip that we’ve been experiencing since the fall of 2019, along with the economic disruptions from the pandemic, are only preludes to what will be the biggest economic crash in history. The entire economy has been “subprimed,” tied in with ever-rising debt which is so ubiquitous that it extends to the American population’s record credit card debt levels. It’s no coincidence that the dollar’s purchasing power just reached a record low; all the recent financial trends confirm the predictions from some economists about the dollar experiencing a crash this year. Through its relentless sanctions against rival superpowers, Washington has diminished the global usage of its own currency and further helped set the stage for a dollar crash. And this rapid drop in currency value will go along with the bursting of the financial bubble which permeates every facet of our daily lives.

Imagine what will happen when these factors combine with the kinds of things we’re seeing in the zones that are being impacted by the storms. Power outages for millions, profiteering by electric companies amid the catastrophe, and a stark class divide in access to power are now the norm in this country due to the climate crisis. If this is what the shifting of the polar vortex due to global warming can do, the 2019 Pentagon report that anticipated a long-term nationwide power grid breakdown because of climatic disasters within the next twenty years has been vindicated.

Still-rising unemployment, an austerity paradigm that’s being perpetuated by the Biden administration’s militarism, and the recently reported record-breaking rise in mortgage loans are going to combine with these factors to rapidly drive down the living standards of tens of millions.

These kinds of steps towards social unraveling can only keep getting more massive as the ecological breakdown continues, with the destruction of food distribution systems being one of the many expected consequences. And as always, the capitalists will continue to do what they do best and exploit these dire situations. The variable in the story, the factor that can tear down this system which perpetually foists the costs of the world’s crises onto the poor, is the prospect of growth for the strength of revolutionary socialist organizations.

This is the most important point. As a rule, the acceleration of necro-capitalism is only going to result in greater harm being done to the lower classes, with this vicious cycle only able to be broken by the rise of a proletarian revolutionary movement. Otherwise, the weakening of capital will merely serve to expand the misery of the poor. However, as Lenin concluded in “Left-Wing” Communism: an Infantile Disorder, the emergence of such a crisis is the cost of making revolution realizable:

We already see how the weakening of capital is going to affect the exploited. As for how it will affect the exploiters, this will come in time; the 2019 Pentagon report also warns that the U.S. military will be put under great strain from the climate crisis, portending to a near-future scenario where the repressive tools of the ruling class get handicapped. There’s also the decline of U.S. imperial hegemony, which is going to majorly cripple the profit-making tools of the capitalist class when austerity can no longer compensate for these imperialist losses. At that point, it could take only a massive general strike combined with a properly equipped revolutionary vanguard to take down the capitalist state.