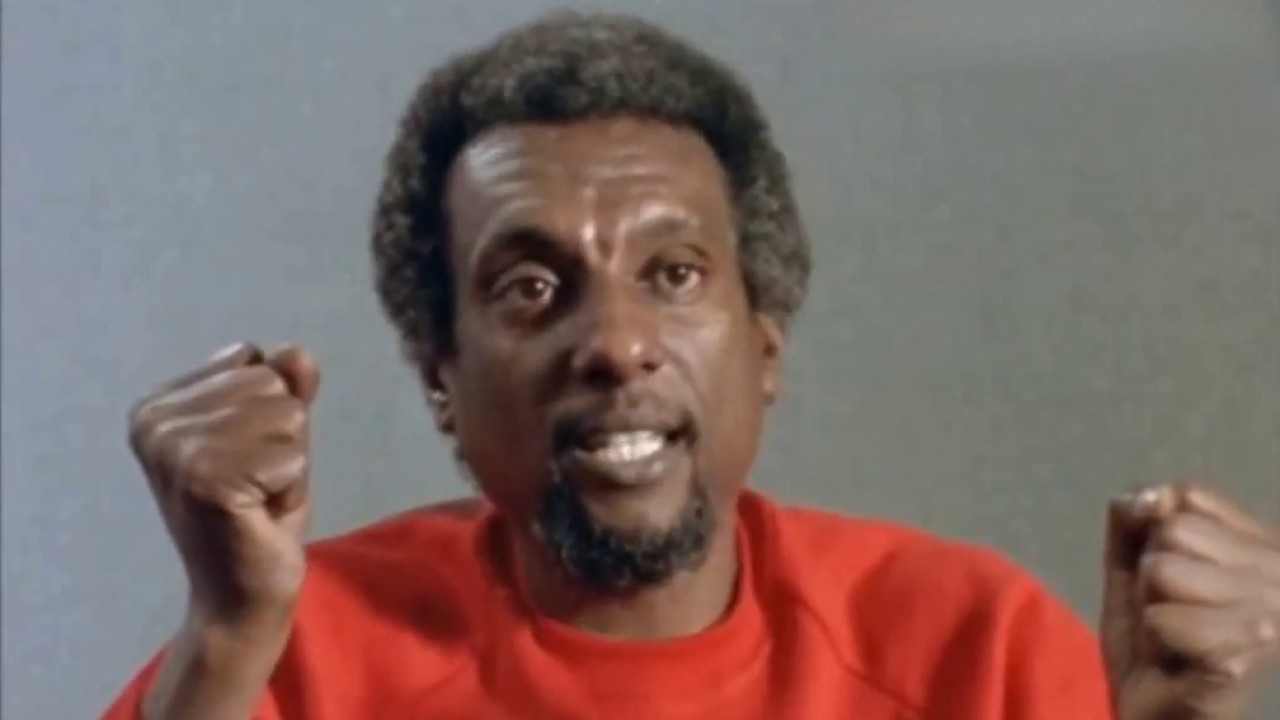 Whenever one writes about a problem in the United States, especially concerning the racial atmosphere, the problem written about is usually black people, that they are either extremist, irresponsible, or ideologically naive.

The liberal tries to become an arbitrator, but he is incapable of solving the problems. He promises the oppressor that he can keep the oppressed under control; that he will stop them from becoming illegal (in this case illegal means violent). At the same time, he promises the oppressed that he will be able to alleviate their suffering—in due time. Historically, of course, we know this is impossible, and our era will not escape history.

The most perturbing question for the liberal is the question of violence.

Today power is defined by the amount of violence one can bring against one’s enemy—that is how you decide how powerful a country is; power is defined not by the number of people living in a country, it is not based on the amount of resources to be found in that country, it is not based upon the good will of the leaders or the majority of that people. When one talks about a powerful country, one is talking precisely about the amount of violence that that country can heap upon its enemy. We must be clear in our minds about that. Russia is a powerful country, not because there are so many millions of Russians but because Russia has great atomic strength, great atomic power, which of course is violence. America can unleash an infinite amount of violence, and that is the only way one considers America powerful. No one considers Vietnam powerful, because Vietnam cannot unleash the same amount of violence. Yet if one wanted to define power as the ability to do, it seems to me that Vietnam is much more powerful than the United States. But because we have been conditioned by Western thoughts today to equate power with violence, we tend to do that at all times, except when the oppressed begin to equate power with violence—then it becomes an “incorrect” equation.

Then the question of violence is raised as the incorrect means to attain one’s ends. Witness, for example, that Britain, France, and the United States have time and time again armed black people to fight their enemies for them. France armed Senegalese in World War II, Britain of course armed Africa and the West Indies, and the United States always armed the Africans living in the United States. But that is only to fight against their enemy, and the question of violence is never raised. The only time the United States or England or France will become concerned about the question of violence is when the people whom they armed to kill their enemies will pick up those arms against them. For example, practically every country in the West today is giving guns either to Nigeria or to Biafra. They do not mind giving those guns to those people as long as they use them to kill each other, but they will never give them guns to kill another white man or to fight another white country.

The way the oppressor tries to stop the oppressed from using violence as a means to attain liberation is to raise ethical or moral questions about violence. I want to state emphatically here that violence in any society is neither moral nor is it ethical. It is neither right nor is it wrong. It is just simply a question of who has the power to legalize violence.

It is not a question of whether it is right to kill or it is wrong to kill; killing goes on. Let me give an example. If I were in Vietnam, if I killed thirty yellow people who were pointed out to me by white Americans as my enemy, I would be given a medal. I would become a hero. I would have killed America’s enemy—but America’s enemy is not my enemy. If I were to kill thirty white policemen in Washington, D.C. who have been brutalizing my people and who are my enemy, I would get the electric chair. It is simply a question of who has the power to legalize violence. In Vietnam our violence is legalized by white America. In Washington, D.C., my violence is not legalized, because Africans living in Washington, D.C., do not have the power to legalize their violence.

I used that example only to point out that the oppressor never really puts an ethical or moral judgment on violence, except when the oppressed picks up guns against the oppressor. For the oppressor, violence is simply the expedient thing to do.

Is it not violent for a child to go to bed hungry in the richest country in the world?I think that is violent. But that type of violence is so institutionalized that it becomes a part of our way of life. Not only do we accept poverty, we even find it normal. And that again is because the oppressor makes his violence a part of the functioning society. But the violence of the oppressed becomes disruptive. It is disruptive to the ruling circles of a given society. And because it is disruptive it is therefore very easy to recognize, and therefore it becomes the target of all those who in fact do not want to change the society.

If I kill in Vietnam I am allowed to go free; it has been legalized for me. It has not been legitimatized in my mind. I must legitimatize it in my own mind, and even though it is legal I may never legitimatize in in my own mind. There are a lot of people who came back from Vietnam, who have killed where killing was legalized, but who still have psychological problems over the fact that they have killed. We must understand, however, that to legitimatize killing in one’s mind does not make it legal. For example, I have completely legitimatized in my mind the killing of white policemen who terrorize black communities. However, if I get caught killing a white policeman, I have to go to jail, because I do not as yet have the power to legalize that type of killing. The oppressed must begin to legitimatize that type of violence in the minds of our people, even though it is illegal at this time, and we have to keep striving every chance we get to attain that end.

This leads to the third pitfall of the liberal. The liberal is afraid to alienate anyone, and therefore he is incapable of presenting any clear alternative. Look at the past presidential campaign in the United States between Nixon, Wallace, and Humphrey. Nixon and Humphrey, because they try to consider themselves some sort of liberals, did not offer any alternatives. But Wallace did, he offered clear alternatives. Because Wallace was not afraid to alienate, he was not afraid to point out who had caused errors in the past, and who should be punished. The liberals are afraid to alienate anyone in society. They paint such a rosy picture of society and they tell us that while things have been bad in the past, somehow they can become good in the future without restructuring society at all.

What the liberal really wants is to bring about change which will not in any way endanger his position.

The liberal says, “It is a fact that you are poor, and it is a fact that some people are rich but we can make you rich without affecting those people who are rich”. I do not know how poor people are going to get economic security without affecting the rich in a given country, unless one is going to exploit other peoples. I think that if we followed the logic of the liberal to its conclusion we would find that all we can get from it is that in order for a society to become equitable we must begin to exploit other peoples.

Fourth, I do not think that liberals understand the difference between influences and power, and the liberals get confused seeking influence rather than power.

The conservatives on the right wing, or the fascists, understand power, though, and they move to consolidate power while the liberal pushes for influence.

These pitfalls are present in his politics because the liberal is part of the oppressor. He enjoys the status quo; while he himself may not be actively oppressing other people, he enjoys the fruits of that oppression. And he rhetorically tries to claim the he is disgusted with the system as it is.

Because of the above reasons, because the liberal is incapable of bringing about the human idealism which he preaches, what usually happens is that the oppressed, whom he has been talking to finally becomes totally disgusted with the liberal and begins to think that the liberal has been sent to the oppressed to misdirect their struggle, to rule them. So whether the liberal likes it or not, he finds himself being lumped, by the oppressed, with the oppressor—of course he is part of that group. The final confrontation, when it does come about, will of course include the liberal on the side of the oppressor. Therefore if the oppressed really wants a revolutionary change, he has no choice but to rid himself of those liberals in his rank.

“Dr. King’s policy was that nonviolence would achieve the gains for black people in the United States. His major assumption was that if you are nonviolent, if you suffer, your opponent will see your suffering and will be moved to change his heart. That’s very good. He only made one fallacious assumption: In order for nonviolence to work, your opponent must have a conscience. The United States has none.”

Kwame Ture was born Stokely Carmichael on June 29, 1941 in Port of Spain, Trinidad, the son of Adolphus and Mabel Carmichael. He immigrated to the United States in 1952 with his family and settled in New York, New York. He graduated from the academically elite Bronx High School of Science in 1960 and made the decision to attend Howard University. Howard University conferred on him a Bachelor of Science Degree in Philosophy in 1964.

It was while in Washington that Stokely became deeply involved in the “Freedom Rides,” “Sit-Ins,” and other demonstrations to challenge segregation in American society. He participated with the Congress of Racial Equality (CORE) and the Nonviolent Action Group (NAG). He later joined the Student Nonviolent Coordinating Committee (SNCC) and was elected its National Chairman in June 1966. While in Greenville, Mississippi, he along with his friend and colleague Willie Ricks, rallied the cry “Black Power” which became the most popular slogan of the Civil Rights era. Consequently, he became the primary spokesman for the Black Power ideology. In 1967, he coauthored with Charles V. Hamilton, Black Power, the Politics of Liberation in America. That same year, Stokely was disassociated from SNCC and he became the Prime Minister of the Black Panthers, headquartered in Oakland, California. He soon became disenchanted with the Panthers and moved to Guinea, West Africa.

While residing in Africa, Stokely Carmichael changed his name to “Kwame Ture” to honor Kwame Nkrumah, who led Ghana to independence from Britain, and, Sekou Toure, who was President of Guinea and his mentor. For more than 30 years, Ture led the All-African People’s Revolutionary Party and devoted the rest of his life to Pan Africanism, a movement to uproot the inequities of racism for people of African descent and to develop an economic and cultural coalition among the African Diaspora.

In 1998, at the age of 57, Kwame Ture died from complications of prostate cancer. To the end he answered the telephone, “ready for the revolution.” His marriage to Miriam Makeba and Guinean physician Marlyatou Barry ended in divorce. He has one son, Bokar, who resides in the United States.